Uta-Do | 2022 | Nairobi Gloria Nsangi Nakyagaba (University of Oklahoma) Mary Lawhon (University of Edinburgh) In May of 2022, thirty or so scholars, artists and activists (and many self-identifying as a combination of these) joined together for a week of discussion and reflection in Nairobi at UTA-Do: African Cities Workshop. Our week began with […] 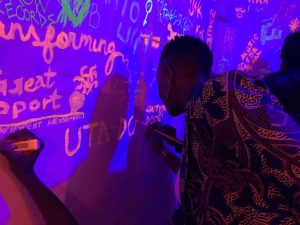 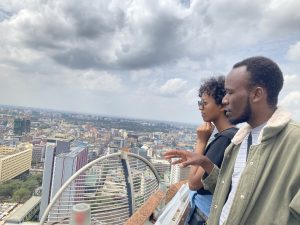 In May of 2022, thirty or so scholars, artists and activists (and many self-identifying as a combination of these) joined together for a week of discussion and reflection in Nairobi at UTA-Do: African Cities Workshop. Our week began with a reflection on the phrase that brought us together, and its myriad meanings. Uta-do can be said in a tone of resignation: it might be what is said when a boda-boda driver wants to renegotiate a fee, when a cell phone disappears, when the bumpy road makes you late.

But this is not the uta-do mentality that brought us together.

Instead, for most of us, we came together to think through the proactive version of uta-do: what are we going to do about the cities in which we dwell, research, and learn? This question has been posed through a developmentalist lens to those in and engaging with African cities for generations, and in that sense, there is little new to the idea of needing to ‘do something’.

But the workshop UTA-Do followed the question of ‘what are we going to do’ with a reflection on what it means to ‘do’ southern urbanism. The responses, experiences and approaches to this question were as diverse as the experiences and professions of the workshop participants. African cities are different, and it can be difficult to frame them as such without either demonizing or romanticizing the challenges therein. From informality to migration (a result of cities not built for black Africans, and an ongoing desire by many to leave the city after accumulating wealth), the examples shared in this regard were from different parts of Africa represented in this workshop were similar yet not the same. And yes, in each story we could hear the ways people claim, navigate, or negotiate for space in the city that carries a history of segregation upon which most African cities were founded and continue to be shaped by social class. 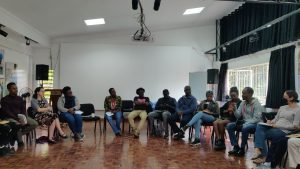 We reflected on common words in the city like ‘hustle’ that have been both a source of concern by elites, repackaged by populist politicians, and increasingly questioned for their moralism: is it good that so many lives (north and south) are driven by a sense that all we do is hustle? We reflected on what it might mean to tell stories otherwise, whether stories of joy and sensuality (inspired by queer studies) or centering everyday experiences (inspired by black geographies), and to think through struggles as well as the ways in which people continue to flourish even in harsh conditions (inspired by activists).

We concluded that African urbanisms are shaped by the experiences of people in the city-making processes and African cities should be seen for their particularities as opposed to conventional ways informed by west-centric approaches. And this is still a challenge as many approaches contributing to Southern urbanism are based off Northern ideals or scholars are from institutions in the North. We should think not ‘without a north’ but rather about what African cities might say to those who live in them as well as those elsewhere. This includes not only understanding what cities are, who lives there and what happens, but also thinking through our varyingly different roles, responsibilities, insights and blind spots as we continue to search together for answers to the question: uta-do?

The Inaugural Uta-Do African Cities Workshop (2022) was hosted in Nairobi at the British Institute of Eastern Africa. Uta-Do 2022 was conceptualized and convened by Wangui Kimari, Prince Guma and Liza Rose Cirolia.

The 2022 programme was made possible by the generous support of the African Centre for Cities (University of Cape Town), British Institute in Eastern Africa, Mathare Social Justice Centre, the University of Basel, the Riksbankens Jubileumsfond under the project Examining nature-society relations through urban infrastructure (project number: P19-0286:1) and the Volvo Research and Educational Foundations, under the MAC programme.

Gloria Nsangi Nakyagaba is a doctoral student in the Department of Geography and Environmental Sustainability at the university of Oklahoma. Her research focuses on urban sanitation, energy and sustainability.

Dr. Mary Lawhon is an urban political ecologist and human geographer based at the University of Edinburgh .  Empirically, her work has focused primarily on waste and sanitation. Conceptually, her works seeks to a) politicize theory and practice, including the politicization of sociotechnical transition theory, and b) provincialize theory and practice, including urban and urban political ecological theory. Her approach is informed by nearly ten years of experiences in South Africa since 2002, including work at the Universities of KwaZulu-Natal, Cape Town, and Pretoria, as well as a lot of informal conversations, long walks, public transportation and volunteering with the NGO Earthlife Africa.