Kibera in Nairobi: Bukonola (Bukky) Ngobi and Joe Mulligan from Kounkuey Design Initiative (KDI) gives the background to a video about life in Kibera that they facilitated in making. It displays important down-to-the-ground innovative design and infrastructure practices that makes a difference. And that can scale and change the urban fabric.   As far as I can see, a […]

Kibera in Nairobi: Bukonola (Bukky) Ngobi and Joe Mulligan from Kounkuey Design Initiative (KDI) gives the background to a video about life in Kibera that they facilitated in making. It displays important down-to-the-ground innovative design and infrastructure practices that makes a difference. And that can scale and change the urban fabric.

As far as I can see, a lot of people talk about Kibera, but my BIG question is: do they really know what they are talking about? We have a life in Kibera, our children go to school in Kibera, we buy food in Kibera, we get clean water from Nairobi Water, we own our businesses, we are students, we are land owners, we can bank in Kibera, we have good social organisations.

The above extract comes from a passage written in 2015 by Ibrahim Maina, a life-long Kiberan and Program Coordinator at Kounkuey Design Initiative (KDI). Ibra had been trying to write a blog piece about life in Kibera after reading a wildly inaccurate article about the settlement in a well-known international news outlet last year.

Kibera is a poor neighbourhood in the centre of Nairobi which has been described as many things, including “Africa’s largest slum” and one of the “10 places you would not want to live”. The settlement has many challenges including insecure housing, poor sanitation, vulnerability to fire and flooding and high rates of unemployment and crime. At the same time it is has a vibrant informal economy, thriving community networks, and contributes a huge part of the city workforce which underpins the larger Nairobi boom. As a city of 100’s of 1000’s of people Kibera cannot be simply categorised and many of its residents are increasingly aware of and exasperated by the simplistic external portrayal of their home.

To provide a more nuanced view of the place, KDI along with LightBoxAfrica, made a short video called “We have a life in Kibera”. The first-time blogger in the video is living Ibra’s experience, struggling to counter the overwhelming pre-eminence of negative narratives and imagery by using his voice to introduce the realities of Kibera life, and also provide examples of positive resident-led activities within the slum using the example of the Kibera Public Space Project. 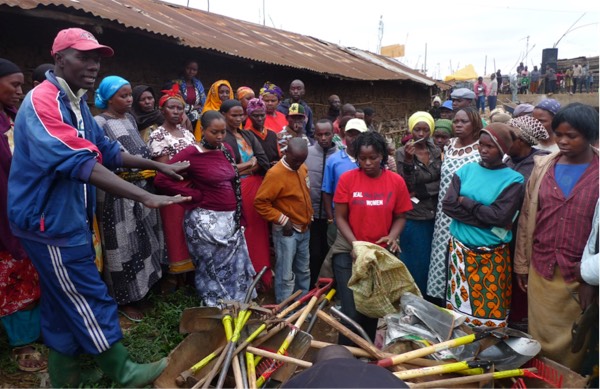 About “We Have a Life”: The video was a winner of Rockefeller Foundation’s Storytelling Challenge Award in 2015, the proceedings of which KDI has used to launch a competition in Kibera called #TuJengeKibera (“We Build Kibera”), that aims to foster and support resident-led change in the settlement. Contact joe[AT]kounkuey[DOT]org and bukky[AT]kounkuey[DOT]org for more info.

About KDI: KDI was started in Kibera in 2006 as a partnership with residents that explored the potential of public space to address priority needs of under privileged communities within the settlement. Ibra was one of the first community members to partner with KDI and has since been central to developing the organisation in Kibera. The resulting Kibera Public Space Project (KPSP) has grown into a network of active, and attractive community hubs spread across the settlement. To date there are seven completed projects with an eight in construction and ninth in planning, all designed, implemented and operated by residents. The foundation of all these projects is built on the existing assets of people and land, an understanding of the realities and dynamics of Kibera life, and solutions that respond to resident’s real needs and priorities. For more information on KDI go to learn more about recent changes in Kibera at blog.kounkuey.org. Contact: joe[AT]kounkuey[DOT]org for more info.