I’m walking through Guet Ndar, a neighbourhood in Saint-Louis, Senegal. We can hear the waves of the nearby Atlantic Ocean. During my last visit, a number of years ago, they seemed perhaps more distant, whereas now they seem almost upon us. We turn a corner near a mosque and look out. What were once streets […]

I’m walking through Guet Ndar, a neighbourhood in Saint-Louis, Senegal. We can hear the waves of the nearby Atlantic Ocean. During my last visit, a number of years ago, they seemed perhaps more distant, whereas now they seem almost upon us. We turn a corner near a mosque and look out. What were once streets are now the ocean, the elementary school has become a ruin of collapsed concrete and a new line of buildings stand facing the fierce Atlantic.

The fishing settlement of Guet Ndar lays across from the historical centre of Saint-Louis. It operates as a crucial space for the fishing trade across the region, with distribution stretching into the Sahel and as far as Mali. With over 30,000 residents housed in this dense, popular neighbourhood, a strip of sand no more than one kilometre long, and nowadays 200 meters wide, a precarious future has become a lived present. The effects of rising sea-levels from climate change are being experienced in Saint-Louis in ways that foretell urban futures for millions of people living in coastal settlements across the continent.

Here, the Atlantic Ocean in Guet Ndar is a paradox. It gives life through the incomes of the fishermen and the ways the community has lived as a sea-facing people. But as climate change accelerates the ocean is increasingly destroying the very foundations of this settlement as its threatens to submerge this fishing dependent neighbourhood. In excess of 200 households have already been displaced to the mainland. In 2016 the elementary school was destroyed in a single night by a huge storm. And yet understandings of threat, hazards and risk in the city and beyond seem to remain orientated to the future, rather than the present.

At its highest, the city is less than four metres above sea level. Like many cities along coastal regions, it is facing a precarious future as global transformations instigated by climate change are bringing the ocean higher and closer. UN Habitat’s Alioune Badiane designated Saint-Louis, “the city most threatened by rising sea levels in the whole of Africa.” Even small shifts in the sea level are beginning to have profound impacts on the balance between the river and the ocean, causing problems such as seawater infiltration and increased flooding events. Saint-Louis’s hinterlands are equally at risk as the Langue de Barbarie, a dune strip along the coast begins to disintegrate into the Atlantic. Now over 210,000 people are facing immediate problems from sea-level rises across the wider city. Climate change in Saint-Louis is producing a form of socio-ecological violence that is highly uneven, effecting particularly the poor of the city. But it is also contradictory: in-land the problems revolve around aridity, lack of water supply and an encroaching Sahel. This shows the complex and multifaceted natures of contemporary climate change across cities and how different people are living through the early onset of such dynamics.

While there has been some level of investment into the city, this has primarily focused on saving and restoring the internationally significant historic buildings on the main island in Saint-Louis or delivering public services and infrastructures. There has been little finance available to address climate change, despite good work by the municipality and UN agencies. The disruptive dynamics of climate change play into an historically produced, global inequality on a continent that has contributed only 2.3 per cent of historic carbon dioxide (CO2) emissions and where contemporary CO2 emissions per person are nearly twenty times less than that of the USA. And yet as Guet Ndar is experiencing, it is those cities and vulnerable populations least able to address the climate changed present that are facing the first waves of such global carbon displacement. 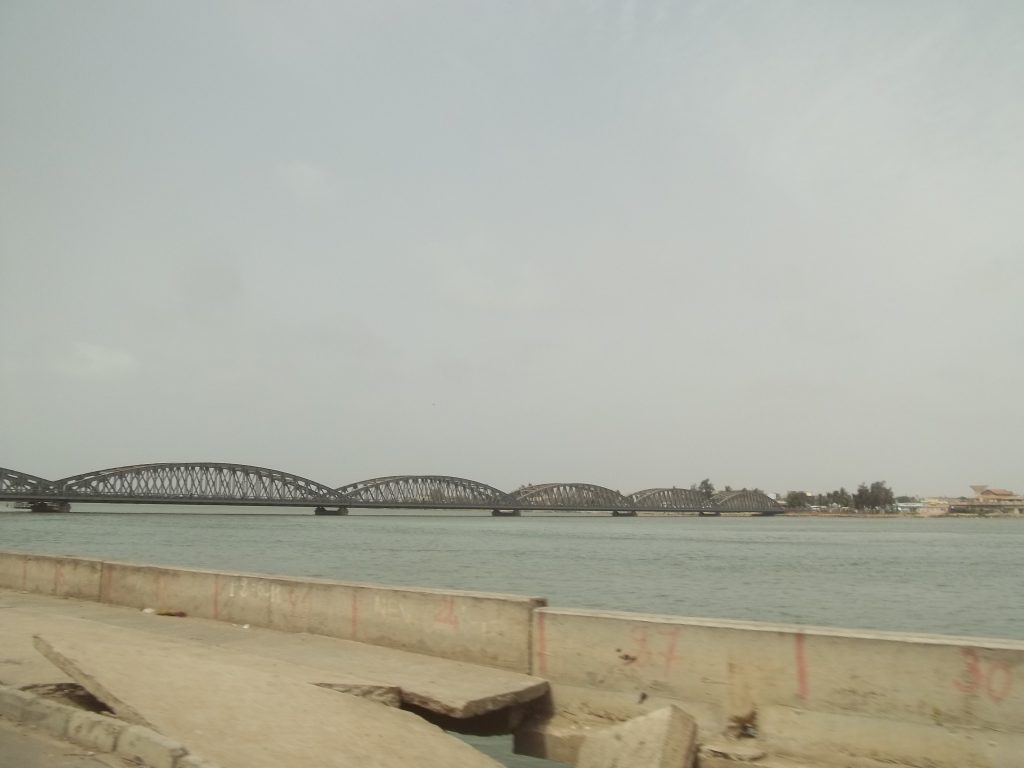 Saint Louis is a city surrounded by water. 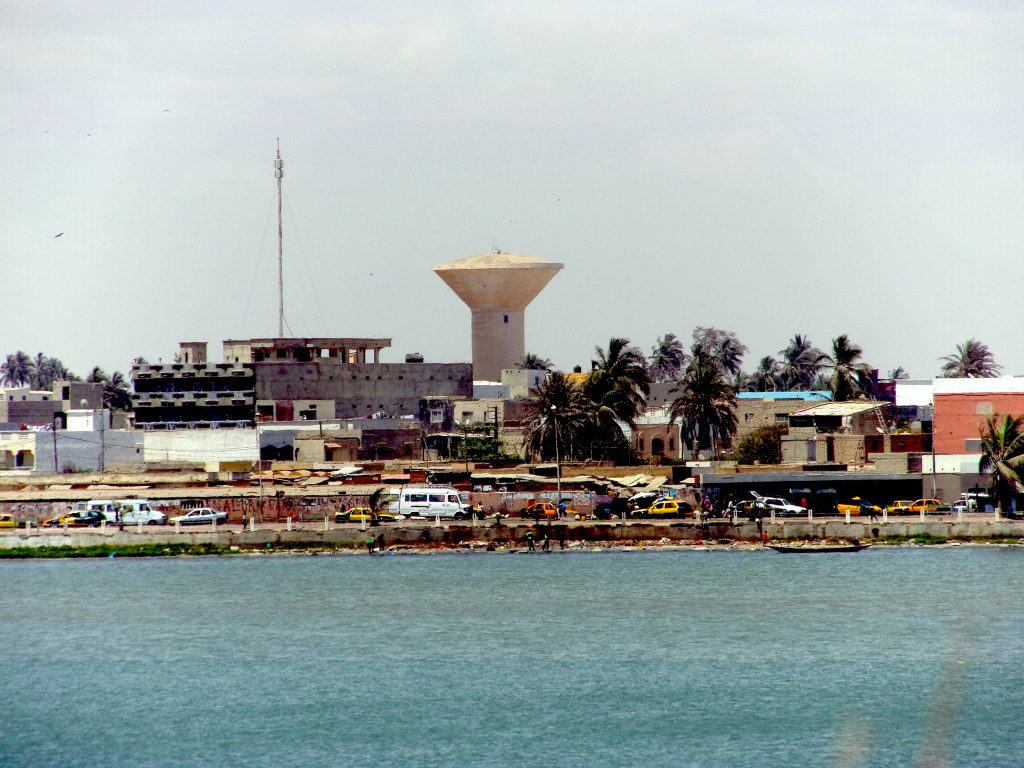 Nowhere in Saint Louis is higher than 4 metres above sea-level, making it Africa’s most at risk city in relation to climate change 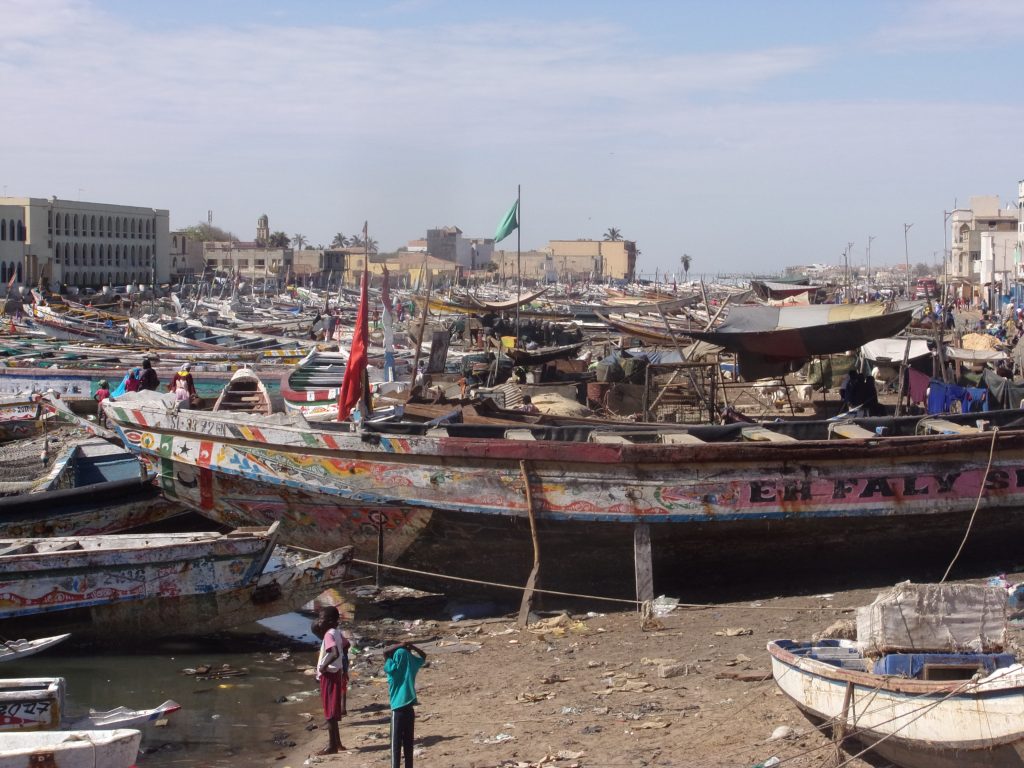 The fishing settlement of Guet Ndar houses over 30,000 residents working in the fishing trade. Their homes and businesses are already suffering from the early effects of climate change. 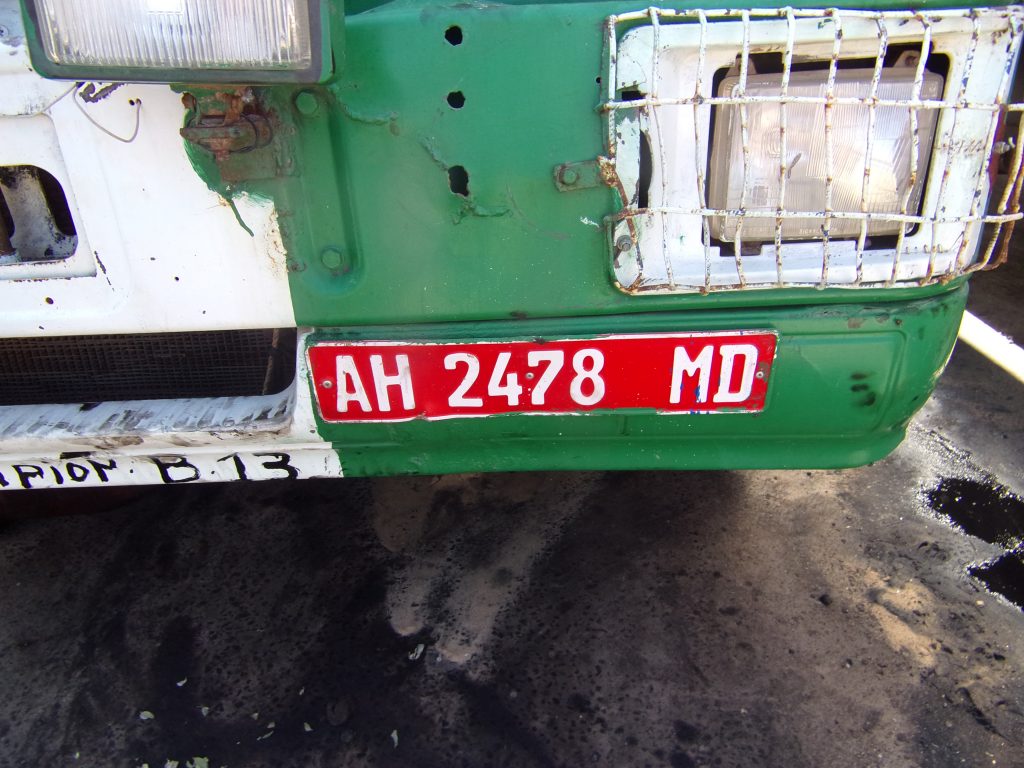 A Mali number plate shows how far the distribution networks for the fishing trade span across the region. 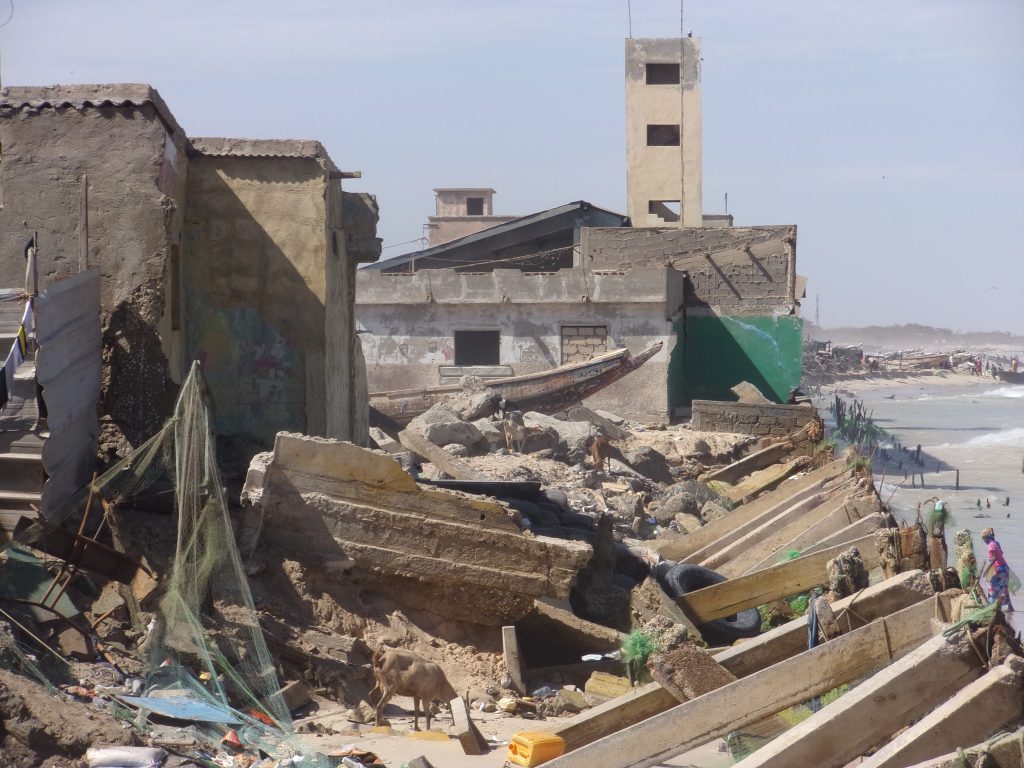 The concrete ruins of an elementary school stand as testament to the rising ocean. 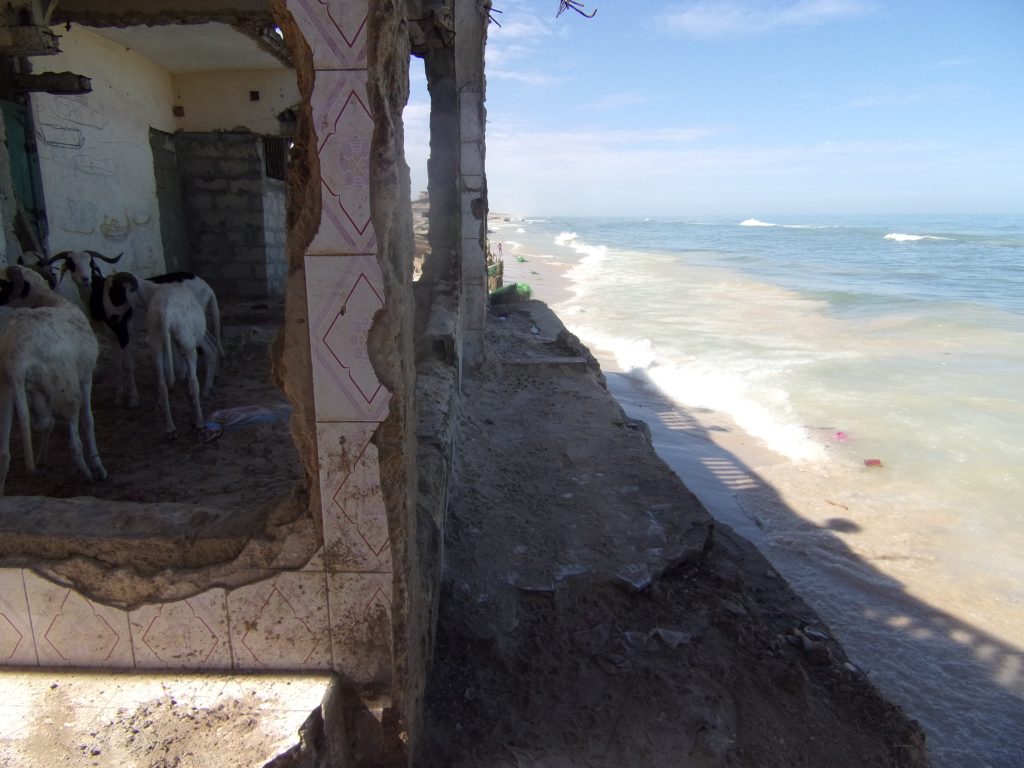 Goats stand looking out from a ruined house at the encroaching Atlantic Ocean. 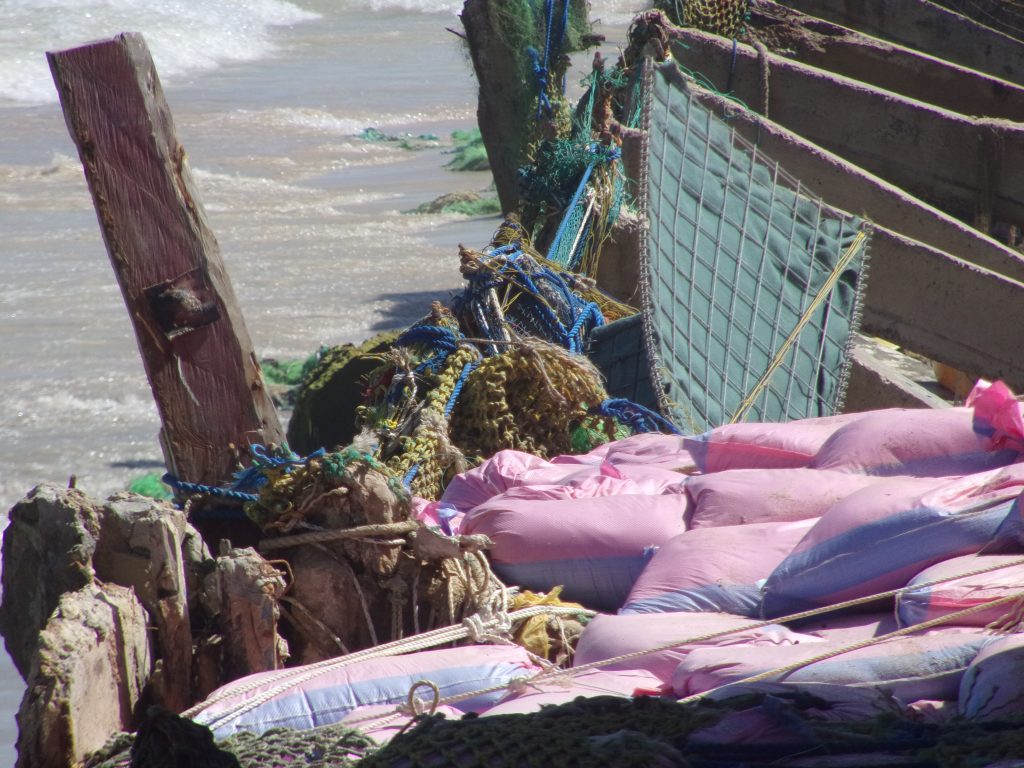 The community is trying to slow down the ocean through new barriers such as sand-filled bags. But these will likely only hold the ocean back for some time. 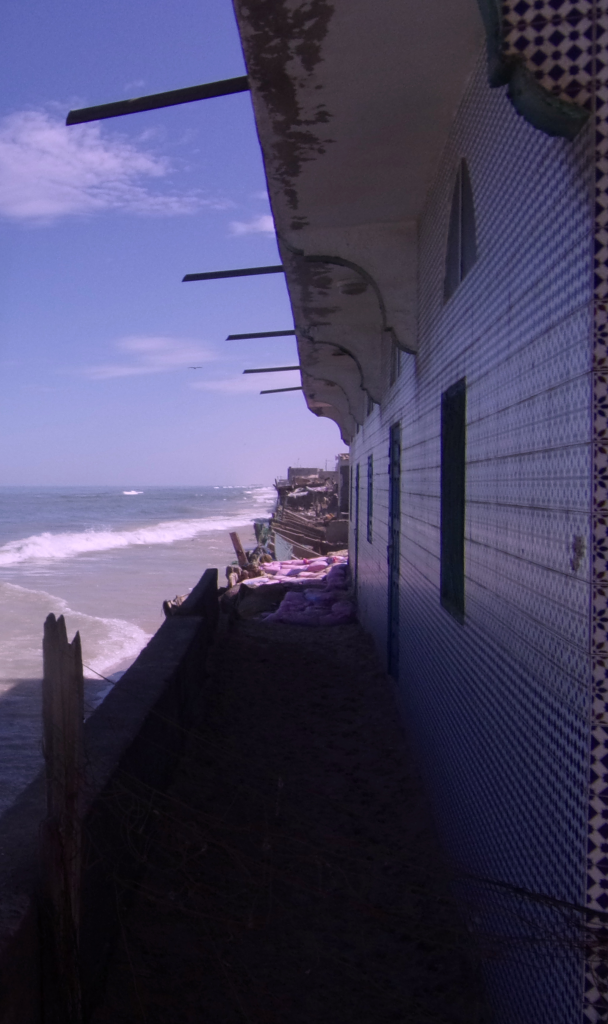 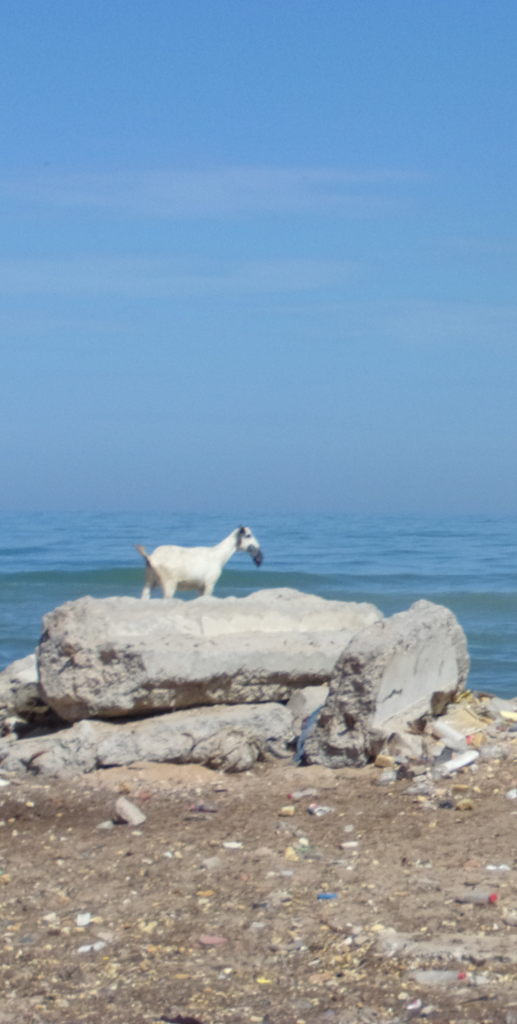 All along the ocean side of Guet Ndar the rising Atlantic Ocean is causing whole streets to disappear as climate change becomes a lived experience. 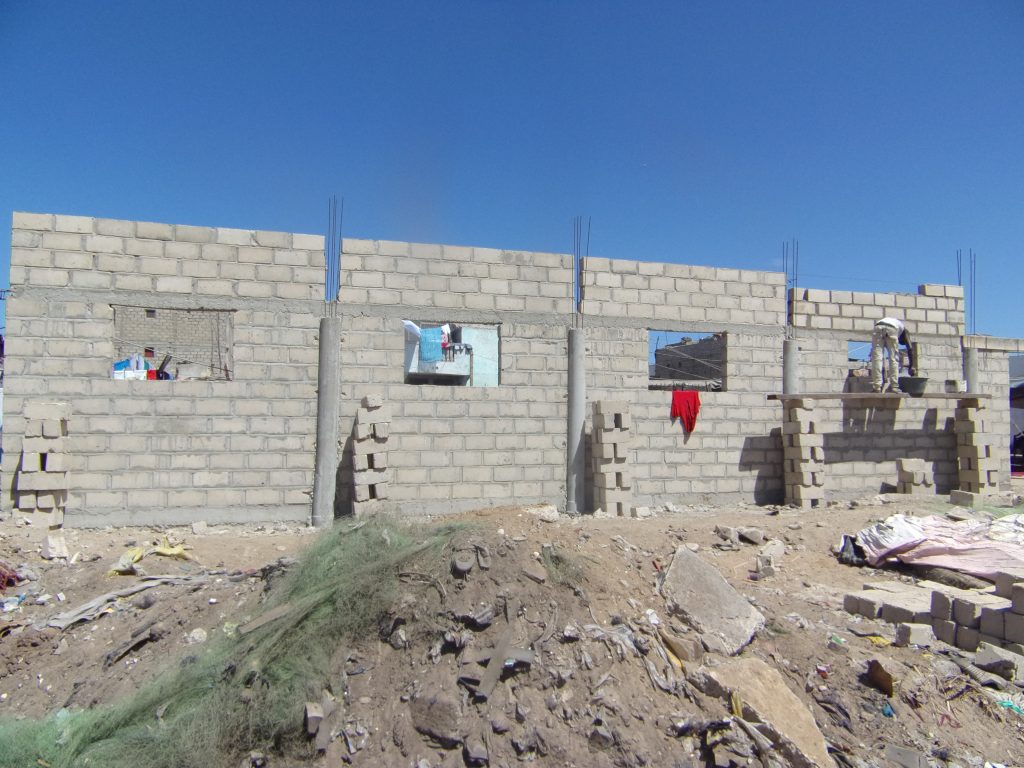 Urbanisation carries on regardless in Guet Ndar as growing households means that new space is always in need. 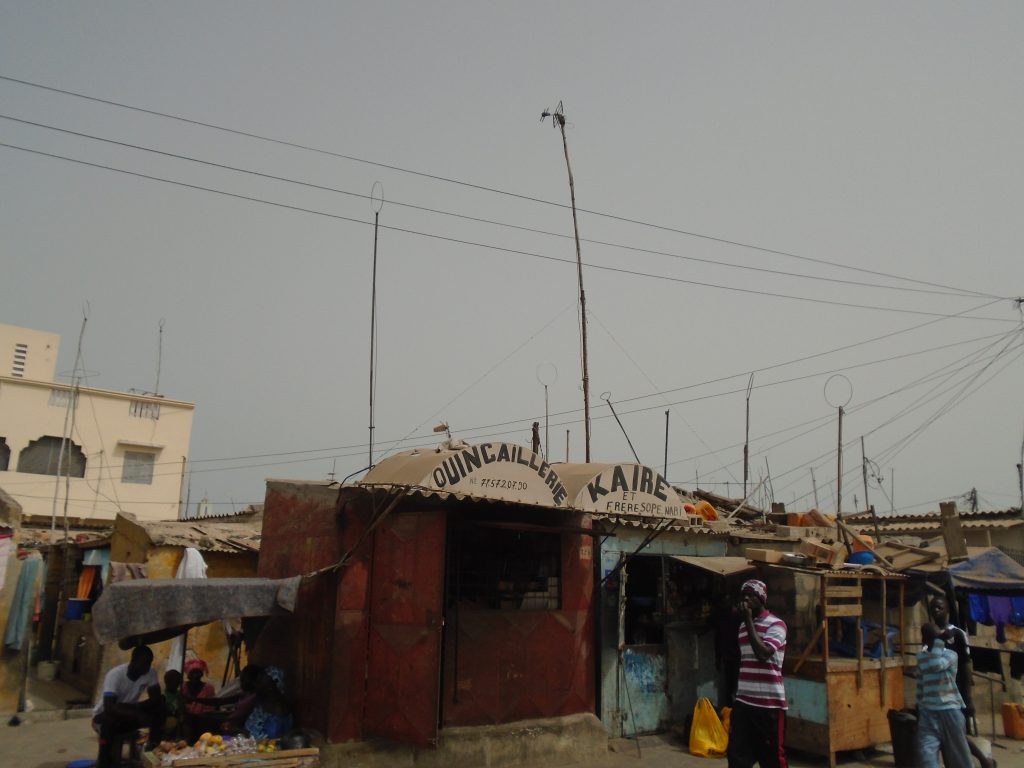 Everyday life in Guet Ndar is threatened by climate change and little is being done to secure people’s livelihoods. 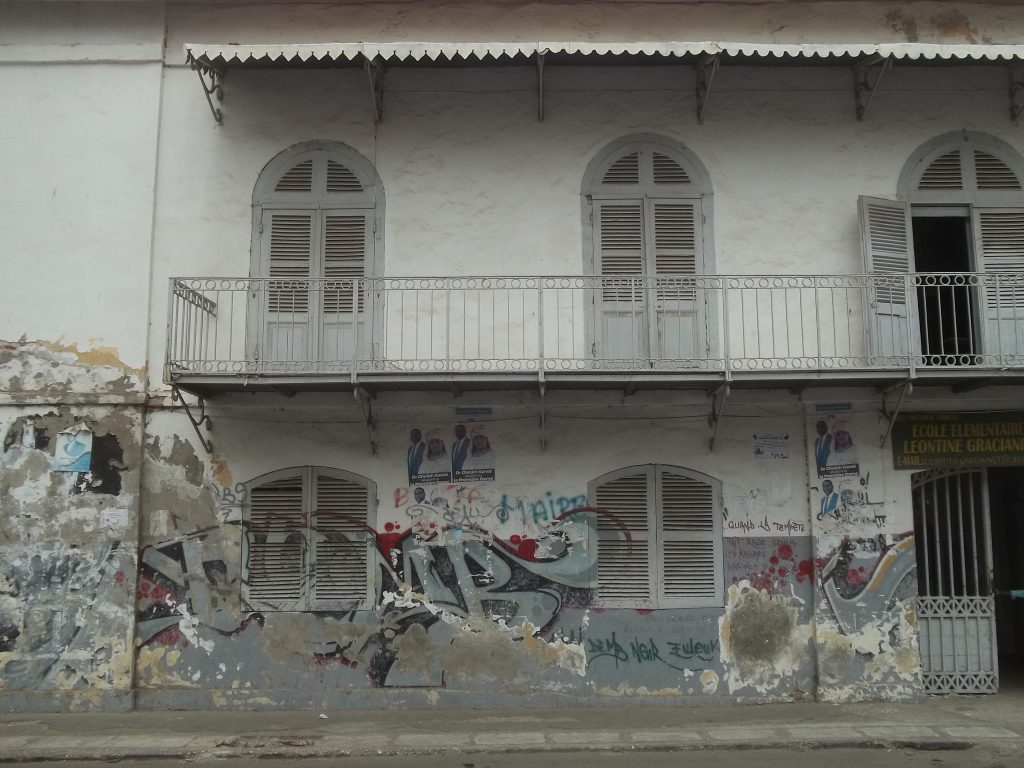 The colonial buildings on the historic island of Saint-Louis have received some investment but they will soon also be threatened by sea-level rises. 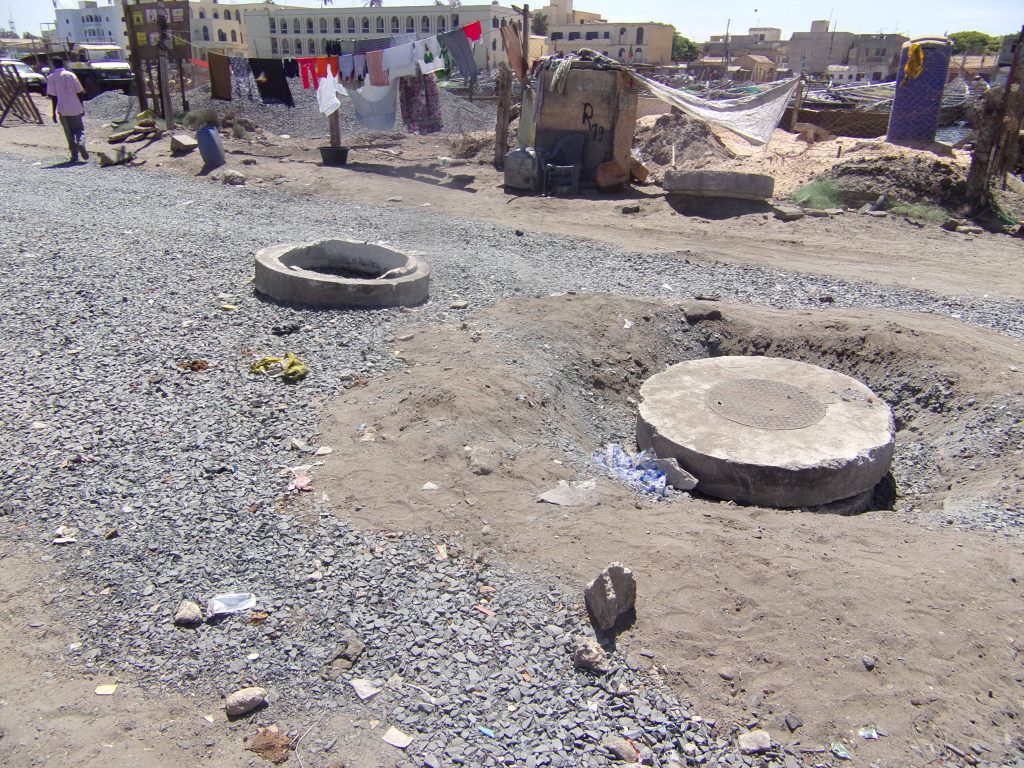 Investment in infrastructure is ongoing, here new sewerage system is installed despite worries about the effects of sea level rises on its operation.