Jakarta is marked by a paradox: the city suffers from both too much and too little water. During monsoon season, heavy precipitation strains the network of canals and waterways that weave through Jakarta’s urban fabric, threatening to overwhelm the city. Rivers swell, sometimes inundating housing constructed along their banks. Water collects in roads, bringing the […]

Jakarta is marked by a paradox: the city suffers from both too much and too little water. During monsoon season, heavy precipitation strains the network of canals and waterways that weave through Jakarta’s urban fabric, threatening to overwhelm the city. Rivers swell, sometimes inundating housing constructed along their banks. Water collects in roads, bringing the city’s traffic to a halt.

During the dry season, meanwhile, the city struggles to provide surface water to its residents. In the absence of a sufficient piped water supply, residents purchase water from vendors or bottled water at inflated prices, and extract shallow groundwater using wells. Public buildings, hotels, and industries meanwhile often pump deep groundwater. This is where water supply connects to flooding: groundwater extraction has contributed to rapid rates of subsidence making Jakarta one of the fastest sinking cities in the world. This has exacerbated the risk of flooding from the sea. The city’s sea wall now sits only inches above the current water level. Subsidence also makes it increasingly challenging to channel floodwaters through canals and into the sea, necessitating the use of pumping stations. 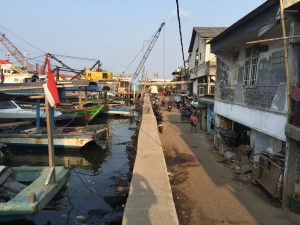 The sea wall at Pluit, North Jakarta in October 2015

Flooding and flood mitigation have become highly politicized issues in Jakarta, particularly as Indonesia’s civil society has expanded since the fall of Suharto. The support of the public can be won and lost on promises made and unfulfilled to solve Jakarta’s flooding. Ahok, Jakarta’s previous governor (2014-2017), earned himself a reputation early on as a man that got things done, making him popular with the middle class. Meanwhile, the city’s urban poor and anti-eviction activists came to regard Ahok as a ruthless politician due in part to his aggressive eviction policy. During his time in office, Ahok oversaw the high profile evictions of Kampung Pulo along the Ciliwung River and publicly blamed the residents of informal riverbank settlements for flooding.

A narrative that places blame squarely on riverbank settlement residents, however, ignores the role of the urban development of water catchment areas (which violate the city’s spatial plan) in exacerbating flooding. This illustrates the unstable distinctions between formality and informality in Jakarta. While world class shopping malls and luxury apartment buildings are “granted amnesty,” to use Asher Ghertner’s phrasing, those settlements that do not meet these aesthetic codes (informal settlements) are labeled as illegal, and treated as such. 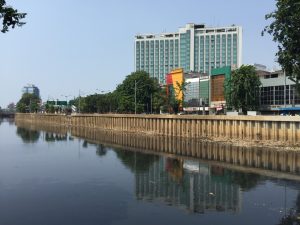 Normalization of the rivers with concrete embankments

The state’s response to flooding is characterized largely by large-scale engineering projects, in step with Dutch interventions during the colonial era. The city has sought to implement a number of what Maria Kaika and Erik Swyngedouw refer to as “technical fixes” to the threat of flooding. In recent years, the city has undertaken a project of normalisasi (normalization), partly funded by the World Bank, in an attempt to alleviate flooding from the rivers. This involves the dredging and widening of the city’s rivers and reservoirs. Realization of these projects has been used to justify the forced evictions of residents from their settlements along the banks of the city’s rivers and reservoirs. NGOs and residents have sought to mobilize against these evictions, which marginalize those already disproportionately impacted by flooding. These contestations demonstrate the close interconnections between concerns about housing and tenure rights, and flood mitigation.

As an alternative to large-scale evictions to facilitate river-dredging projects, community organization Ciliwung Merkeda have advocated for in-situ upgrading and have developed their own designs for kampung housing. These plans envision an alternative (and less binary) relationship with flooding, for example by designing buildings that can flood, and by increasing residents’ interactions with the river to foster a sense of stewardship.

Also reflective of the city’s preference for concrete-heavy projects is the plan for Great Garuda Sea Wall (GGSW) project, currently under consideration by the Indonesian government. Designed by a consortium of Dutch firms in collaboration with several Indonesian ministries, the ambitious master plan proposes the construction of a giant sea wall to enclose Jakarta Bay, transforming it into a freshwater reservoir. Pumping stations will facilitate the flow of the rivers into the ocean. The project will be funded through private-public partnerships: extensive land reclamation, property development and a new toll road are envisioned as adding value and enabling cost recovery.

Critics contend that if implemented the GGSW project could displace the coastal and fishing communities that have long occupied the northern area of the city. The city has already begun to forcibly evict communities residing in unplanned settlements in coastal areas as part of its urban revitalization plans.

As Kaika and Swyngedouw argue: “Whether we depict nature as a thing ‘out there’, to be saved, or as a frontier to be conquered or ignored, it becomes imperative to ask questions about what visions of nature and what urban socio-environmental relations we wish to inhabit […] What issues and whose voices are being silenced and who or what has the right to speak and to be heard?” As the contested landscape of flooding and flood mitigation illustrates, adaptation planning raises questions of socio-environmental justice: who will be protected against environmental threats? Whose bodies, livelihoods, and homes are regarded as collateral necessary to secure the majority? Whose urban-environmental imaginaries are prioritized, and whose are denied legitimacy?

The politics of flood mitigation in Jakarta points to contestations over who gets to decide how the city will approach, manage, and live with nature (in the form of flooding) into the future. Like Jakarta, many coastal mega-cities now face the question of how to respond to the challenges of continued urbanization and climate change. Rising seas, the increased intensity and frequency of weather events, and water scarcity necessitate that we question dominant conceptualizations of human-nature relationships, and reimagine the relationship between urban and environmental processes. In Jakarta, this process is already underway.