Since the late 2000s, the city of Nairobi has become a focal point of large-scale and ambitious transport projects set to resolve the mess that is road traffic in the city. Such projects include the construction of the Thika superhighway, several by-passes and the controversial expressway, an elevated toll road connecting the affluent sides of […]

Since the late 2000s, the city of Nairobi has become a focal point of large-scale and ambitious transport projects set to resolve the mess that is road traffic in the city. Such projects include the construction of the Thika superhighway, several by-passes and the controversial expressway, an elevated toll road connecting the affluent sides of Westlands, a business and residential area, with the Jomo Kenyatta International Airport. Recently inaugurated, the expressway has been termed a road for the rich. In these developments, evictions and demolitions of houses and sometimes entire villages with no compensation are a norm that continues to highlight that Bulldozers are a de facto planning tool of the city.

Of surprise, however, is that the mess seems to never be resolved and what follows are often incremental fixes on the newly constructed infrastructures. This has been the case for the Thika Superhighway, where some modifications made in its short life of 10 years include the removal of speed bumps and a plan to have a BRT system. The BRT case is particularly telling for its incrementalism. In 2019, for example, the innermost lanes were marked as preferential lanes for the expected BRT buses, and in 2021 there was the construction of what would be the pick-up and drop-off booths at the expected stations, but progress has since stalled. As these incremental designs are implemented, the effect has been more traffic on the highway.

Such scenes of incomprehensive incremental designs and construction are not only observable in the transport sector. In fact, they appear to be a norm in different service provision systems, including essential services such as water and Internet connectivity. Basic service provision in my neighborhood in Kasarani, in particular, has been chaotic for some time now, as a result of diverse infrastructural incremental projects.

In the beginning was the tarmacking of the estate road in early 2020, which was decently done and even included a pedestrian lane on one side, the other side being taken by vegetable and groceries stands and kiosks. During the construction water pipes running across the road were constantly severed. This often resulted in no water in the nearby homes and businesses, and when it would flow it, would only go for a day before being interrupted again. 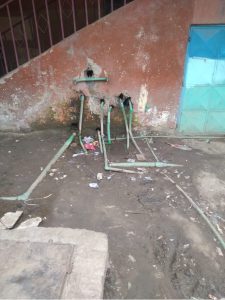 Weeks after the road was done, the residents erected a few speed bumps from improvised materials of stone and soil at specific spots that they felt needed them. This prompted the contractor to return, replacing these auto-constructed bumps with tarmacked bumps at these spots.

A few weeks after the tarmacking, a private corporation offering internet connection services dug a trench on the pedestrian lane to lay their wires. After hurriedly doing this, workers would only refill the trench, not caring to ground the level or re-tarmac the area. Perhaps this was their recognition that more incremental additions would come soon after, and an unconscious agreement that incompleteness (as Guma has written) is a fact of most infrastructures. After close to a month, another internet services company would (re)dig the same area to also lay their wires, also leaving the ground rough and incomplete.

After almost a year, Nairobi Water and Sewage Company in partnership with the Constituency Development Fund (CDF) office would be back to upgrade the sewage network in the area. This meant more diggings, now on the other side of the road, where kiosk and vegetable and groceries stands are located. From conversation with the traders they mention their preference in constructing movable and simple mundane shades for as they say, “there will always be some form of construction here”. Landlords with buildings next to the road have also had to reconstruct the building’s verandas, and now adopt simple designs and materials, signaling their configuring future adjustments given that the network lines and water and sewage pipes pass under them. 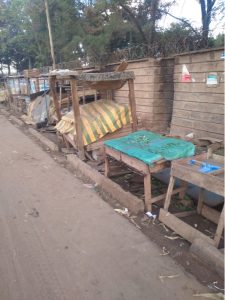 This most recent incremental construction quickly turned out to be the most chaotic we have seen so far, as more water pipes were caught in the digging, necessitating a repiping of the water network in the area for almost a month. In this phase, an interesting observation can be made by looking at how long it took for those at work to finish, the popular narrative being “pesa ya serikali lazima ikuliwe” (government money must be eaten), as workers are paid per day of work. The workers also will often ‘make mistakes’ or ‘forget’ some procedure, say (re) laying a pipe or wire correctly to repurpose a comeback to fix tomorrow or later. The politician commissioning the project also took advantage of it, labeling the project as their initiative and having the workers wear branded reflector jackets with their names and slogans. From my conversation with a local landlord, I also learnt that incremental infrastructures are common in an election year, like the current one, in which politicians who have been missing for four years are keen to show how their good leadership is synonymous with physical infrastructures. 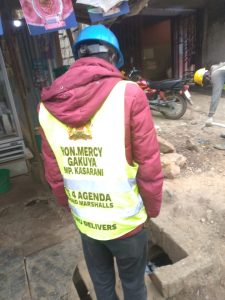 In summary then, infrastructures in Nairobi seem as though they are always in a state of incompleteness by design. Citizens, such as the workers, landlord and greengrocers who plan around formal incrementality that will definitely come, take advantage of incrementality by working with and on incomplete structures that will be easy to rebuild and move. Other citizens, often youths who are casual labourers on incremental projects, make slow additions, sometimes ‘making mistakes’ or ‘forgetting some parts’ to prolong work time to earn more. Politicians also use incompleteness of infrastructure as a design to necessitate further development, especially during campaign periods in order to have something physical they can point to as good leadership.

The author would like to acknowledge the support of Andrea Pollio and Mary Lawhon in reading earlier drafts of this text.