Modern flood infrastructure has failed in its promises. Is it time for a modest approach? Authors Sumit Vij, Wageningen University & Research, the Netherlands Timos Karpouzoglou, Royal Institute of Technology KTH, Sweden Mary Lawhon, University of Edinburgh, the UK This commentary works through how urban flood infrastructure operates and evolves in Guwahati, India. The piece […]

Modern flood infrastructure has failed in its promises. Is it time for a modest approach?

This commentary works through how urban flood infrastructure operates and evolves in Guwahati, India. The piece marks the limitations of modern infrastructure, making a case for heterogeneity – combining technologies, actors and power relations that shape the unpredictable nature-society relationships. We draw upon the conceptualisations of heterogenous infrastructure configurations and modest imaginary to explain the alternative approach of how the world works and, therefore, what modern infrastructure can(not) do. A modest imaginary is not an antithesis of modernity but a different way of understanding the world rooted in uncertainty and an inability to predict and control nature. Adopting this imaginary has implications of the kinds of technologies one believes might be useful— and here we tease out how regime actors shown their interest in small, cheaper, locally emerged technologies.

Suraj (pseudo name) was born and still resides in Guwahati at Tarun Nagar, a low-lying area prone to urban floods. He and his ancestors have witnessed a profound urban change in Guwahati, which is now one of the fastest agglomerating cities in India. He recalls that in the 1980s, a wooden bridge passed over the Bharalu river (Figure 1) that ran through their neighbourhood. The Bharalu had currents, and the women from the Kachari community would use a Jakoi (traditional fishing equipment) to catch fish from the river. Bharalu is a drain now, and this change is one of the key drivers contributing to Guwahati’s ongoing risk of flooding. 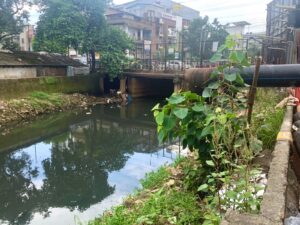 Moreover, instead of preventing floods, new ‘modest’ infrastructure configurations (a combination of ideas, technologies, and actors) seek to reduce their impact, using portable water pumps (GMDA and GDD) that remove water quickly by draining it to the Bharalu. Such modest configurations usually work, but not always: once, when the technician responsible for operating the pumps is unavailable (Figure 2), the water remains in the area for 3-4 days. Pumps also tend to fail if and when Bharalu is overflowing. Suraj’s housing society is not happy with the existing impasse; the only vision of modern infrastructure is promised to come their way, with the city administration marred by corruption and political economy nexus. 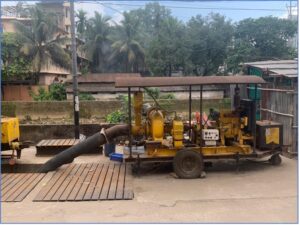 Following the urbanisation trends like other cities, Guwahati has seen three narratives of flood mitigation between the 1980s and 2020, showing how the relations between water, flood infrastructure and the city have changed over time – 1) ‘natural’ drainage to urban flooding (early 1980s-mid 2000s, 2) to responding to the floods with modern planning and integrated drainage system (mid-2000s-2012), and 3) to heterogeneous infrastructure and building-with-floods (2013-2020).

From the 1980s –the mid-2000s, these infrastructure narratives are informed by imaginaries of modernity by the regime actors and policy documents depict a story of what infrastructure is and ought to be. From 2013 onwards, we see a shift in the imaginaries that epitomise heterogeneity – with multiple imaginaries embedded in policies and practices that arise from multiple scales. For instance, certain measures reflecting modernity emerge after a push from the national government and are also complemented by the measures influenced by modest imaginary arising after negotiation between street-level engineers (bureaucrats) and the citizens.

Despite the limitations of modern flood measures, many city administration and residents continue to believe in and invest in modern flood mitigation measures. State actors use the modern infrastructure imaginary to legitimise its power and influence in society, using infrastructure for re-election, conditioning residents to believe in ‘modernity’, even though the infrastructure is built without public participation and has ecological implications. With such a reluctance among city administrators to consider and integrate the modest (alternative) infrastructure imaginary within formal policy processes, non-state regime actors such as academics, activists, and residents showed a preference for alternatives. For instance, the use of portable water pumps has demonstrated its impact in reducing flooding within the low-lying areas of Guwahati. However, such a measure has not been recognised in policy documents. Further, other modest measures used by the marginalised (poor and informal colonies) residents, such as the elevation of existing houses and building dwellings based on ‘chang ghar’ design, have become a common practice but have again failed to find space in urban policy circles.

Inspiration from the traditional housing system has also inspired the middle-class (upper) citizens of Guwahati to elevate their concrete houses to avoid flood water entering their premises. Considering the geomorphology of the city and the significance of its wetlands for reducing the intensity of flash floods and waterlogging, there is a reverberating plea for restoration of the ecosystem. Local activists and environmentalists have been the most vocal and recognise these ‘modest’ imaginaries. Acknowledging these alternative measures may question the prevailing knowledge system—modern approaches where technological artefacts are rooted in modernity and large infrastructural development. There is emergent tensions between the state and the city residents questioning the state’s ability to deal with climate extremes such as the unprecedented rainfall of June 2022, high vulnerability and the over-reliance on several scientific studies and government-sponsored reports on modern solutions.

However, modest flood measures that have emerged from modest imaginaries are slowly seeping into everyday discourse and shaping flood governance, including how mobile pumps have provided relief from drainage congestion and efforts to rejuvenate and protect wetlands. While such practices are increasingly visible, the underlying modest imaginary remains implicit. In this sense, we hope the piece helps us to realise that modern infrastructure may not be able to solve the complex challenges of the global South cities, and it is time to think about infrastructural futures that are realistic and inclusive. In the face of changing ecological conditions and a growing acceptance that nature cannot be controlled, we need to make nature more visible—and able to be worked with– instead of hiding it behind the taps, pipes, and drains.