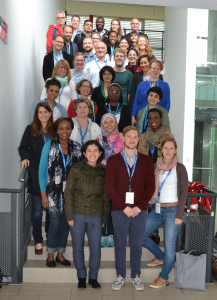 Participants in Decolonizing Urbanism Summer School at University of Trier, 2017. 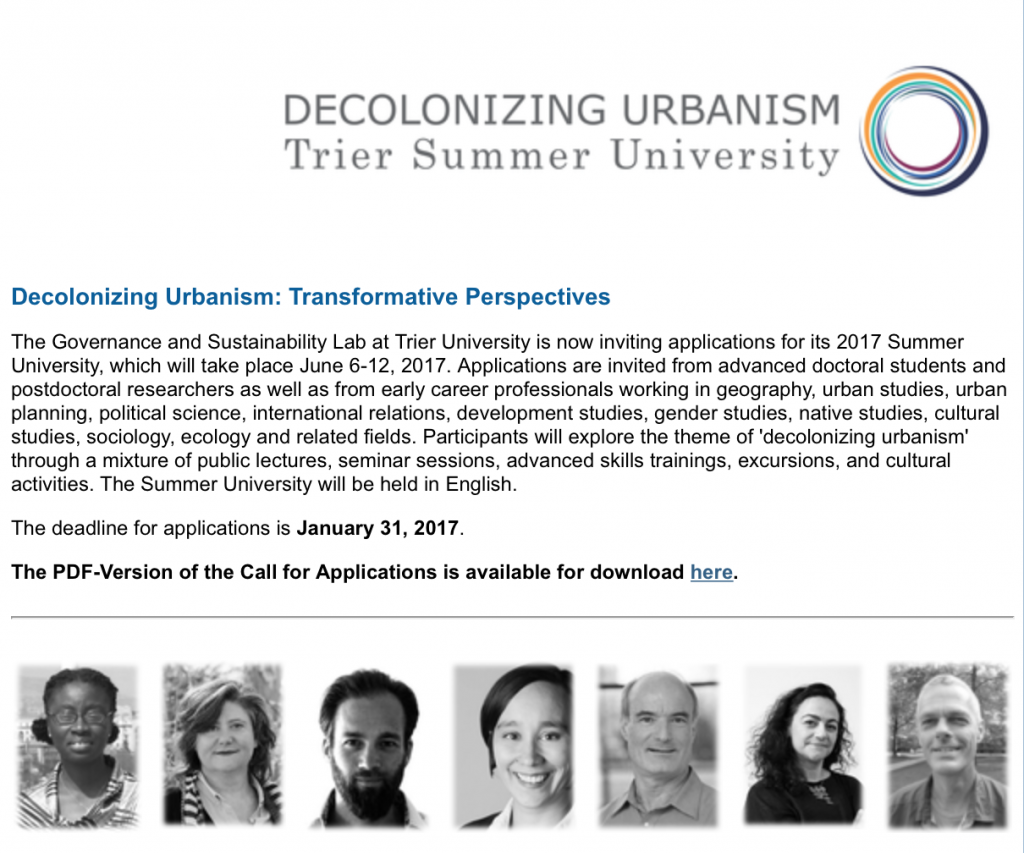 On Our Theme, ‘Decolonizing Urbanism’

When the United Nations was founded in 1945, nearly a third of the world’s population lived in territories that were dependent on colonial powers. Since then, many territories have found freedom, yet a variety of colonial relationships and physical legacies have persisted, such as between military occupiers and surrounding populations, native and non-native populations, and through the presence of major religious organizations, just to name a few. Moreover, a considerable body of critical scholarship has pointed out that contemporary societies are still inextricably linked to coloniality, defined not only as a historically situated and unjust economic model, but also as a racialized, androcentric, and class-based hierarchy of knowing and being which marginalizes non-western cultures, knowledges, and histories.

Today, the coloniality of knowing, being and power also intersects with the negative and unevenly distributed consequences of global mega-trends such as urbanization and climate change, which raises pressing questions. How has the span of urbanism and urbanization – from the related academic disciplines to the physical places, people, politics, infrastructure, and cultures – been affected by the forces of colonization and coloniality? Moreover, as efforts to deliberately steer societal transformations in the so-called ‘Anthropocene’ and the ‘Urban Century’ are unavoidably related to questions of power and politics, we ask what efforts to bring about social change are needed or already underway. We are interested in established themes in the literature as well as forging less obvious and exciting new linkages together among disciplines, practices, and places.

Structure of the Summer University

Well in advance, a number of suggested texts will be made available to participants in preparation for the Summer University. The actual Summer University will last seven days and will include keynote speeches, panel discussions, advanced skills training sessions (e.g. presentation tips), as well as excursions and cultural activities in the city of Trier, the Moselle region, and Luxembourg. Participants will discuss each day’s keynote lectures, workshops, and excursions together in small groups, forging new linkages between readings made available in advance, the presented ideas, and the inputs from participants. Further, participants will be able work on a sub-topic of their interest that is related to the overarching topic of ‘decolonizing urbanism’. Some relevant examples include:

We envision that through this intensive interdisciplinary dialog a joint publication such as an edited volume or special issue will emerge, and time will be dedicated to this effort.

Below you can find our keynote speakers. Additional speakers will be confirmed over the next months. For regular updates on the Summer University program, please visit our website.

Dr. Epifania Amoo-Adare is a social science researcher and educator with over 25 years of experience, working in countries such as Afghanistan, Armenia, Azerbaijan, Georgia, Ghana, Qatar, the UK, and the USA. Dr. Amoo-Adare has a Ph.D. in Education from UCLA and is also a RIBA part II qualified architect. Additionally, she has diverse and post- disciplinary interests in areas such as Critical Pedagogy, Critical Spatial Literacy, Cultural Studies, Decoloniality, International Educational Development, Mobility Studies, ‘Third World’ Feminisms, and Urban Studies.

Encarnación Gutiérrez Rodríguez studied sociology, political science, and Romance languages in Frankfurt, Lyon, and Quito, Ecuador. She has taught and worked at the universities of Manchester and Hamburg, as well as in the USA, Brazil, Argentina, Mexico, Portugal, Sweden, Finland, Austria, and Switzerland. Her areas of interest include global inequality and its local manifestations, and the application of a post- Marxist and decolonial perspective on migration, labor, and culture. Her research projects have been realized in part through support from the DFG (German Research Foundation), the British Academy, the EU, and the Ford Foundation. Gutiérrez Rodríguez has published broadly.

Dr. Henrik Ernstson spends most of his time at the African Centre for Cities at University of Cape Town, while serving as Research Fellow at the KTH Environmental Humanities Laboratory in Stockholm. He recently concluded a PostDoc at Stanford University and holds a PhD from Stockholm University. He is developing a situated approach to urban political ecology that combines critical geography, urban infrastructure studies and postcolonial and global South urbanism, with a focus on collective action, radical democratic theory, knowledge practices and the co-production of alternative research ‘outputs’, including film and theatre. This includes workshops for younger African scholars in South Africa and Uganda and a PhD winter school at ACC on ‘Democratic Practices of Unequal Geographies’ with Dr. Andrés Henao Castro. He is an experienced Principal Investigator with case studies in Cape Town, Kampala, New Orleans and Stockholm with grants from Swedish, British and South African funders. He is currently finalizing two edited book manuscripts and the environmental humanities research film called ‘One Table Two Elephants’, which focuses on the ontological politics of how race, nature, city and history is interconnected in Cape Town.

Dr. Noa K. Ha is an Asian German urban studies scholar based in Berlin and wrote her dissertation in Architecture (Technical University Berlin) on street vending in Berlin. Her research investigates processes of urban production from decolonial, critical race theory, feminist and queer theory perspective. She is on the board of the council of migration Berlin and Brandenburg (Migrationsrat Berlin Brandenburg e.V.), active in the Asian German network orientation e.V. and a board member of Critical Ethnic Studies Association (CESA). Currently she is a post-doc at the Center for Metropolitan Studies, Technical University Berlin, and researches the spatial production of Asian diasporas in European cities. She was a scholarship holder of TU Berlin, Rosa-Luxemburg-Foundation and an associate fellow of the transatlantic graduate program ‘History and Culture of Metropolises in the 20th Century’ at the Center for Metropolitan Studies (Berlin).

David Simon is Director of Mistra Urban Futures, an international research centre on co- production for urban sustainability based at Chalmers University of Technology, Gothenburg, Sweden and also Professor of Development Geography at Royal Holloway, University of London. He has vast international experience in research on sub-Saharan Africa, Asia, the UK, USA and Sweden. His research in relation to urban areas and climate/environmental change has examined the likely implications of environmental change for cities and their populations, as well as seeking to understand how cities are preparing mitigation and adaptation strategies in response. David Simon has served as specialist advisor to UN-HABITAT on cities and climate change, and was one of only two academics on the UK Foreign and Commonwealth Office’s specialist Africa Advisory Group. He has also served on the Scientific Steering Committee of the international Urbanization and Global Environmental Change (UGEC) program which is now within Future Earth. He holds a B.A. with Distinction from the University of Cape Town, B.A. (Hons) from the University of Reading, and a DPhil from the University of Oxford, where he was a Rhodes Scholar.

Dr. Tuna Tasan-Kok is an urban social geographer and planner. She graduated from the Department of City and Regional Planning at Dokuz Eylul University of Izmir and completed her M.Sc. in Regional Planning at the Middle East Technical University, Ankara, Turkey in 1996. Her research focuses on regulation of urban development and change from different angles. Being awarded by Turkish, Polish and Hungarian scientific funds, she worked as a research fellow in Polish and Hungarian Academy of Sciences until 2000. She has received her PhD degree in Social Geography from the University of Utrecht, the Netherlands, in 2004. Dr. Tasan-Kok took up researcher and lectureship positions at the Universities of Leuven (2005-2007), TU Delft, OTB Research for the built Environment (2007-2015), and University College Roosevelt (2011-2014), before taking up her current position in Department of Human Geography, Urban Planning and Inter- national Development at the University of Amsterdam in September 2015.

Stokley Towles is a public artist, librarian, and member of the faculty. His work focuses on the relationship of people to their daily working and living environments, be it the publics’ experience on a trail system, the dynamic world of police officers on the street, how patrons interact with the public library, or the environment of a municipal waste- water system. He holds a B.A. in Semiotics from Brown University, USA (1986), a M.F.A. in Art and Photography from the California Institute of the Arts (1990), and a MLIS, Library and Information Science, from the University of Washington (2008).