Our project (Oct 2012-Oct 2015) focuses on the patterns and politics of environmental governance in small cities in India. So far, research on the dynamics of environmental change, urbanisation and governance in India dominantly focuses on the metropolises. Our understanding of the realities in small and medium size cities from 100,000 to 500,000 inhabitants are, in contrast, under researched. And this in spite of them housing around one fifth of India’s large and growing urban population. These cities often face tremendous environmental challenges such as water pollution, sinking groundwater tables, increasing vehicular traffic, and growing amounts of solid waste. At the same time, they are thought to have less technical and fiscal capacity to address these issues, since decentralisation of local governance and the imposition of neoliberal reforms have pushed municipalities to take over more and more responsibilities. 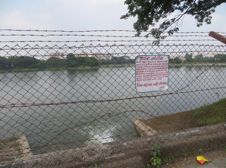 In Navsari, the central urban pond has been re-engineered to become a reservoir for drinking water obtained from a dam on the Tapi river. The municipal sign board warns trespassers from entering the enclosed area. (Photo: A. Zimmer, 16 Oct 2013)

Working through the lens of urban political ecology this project questions the patterns of environmental governance that develop in small cities, and the politics surrounding these. In order to do so, it adopts a comparative case-study approach to examine four small cities in Gujarat and West Bengal. These are states that have had significantly different economic and political trajectories. The former has been pushed to represent an investment- and business-friendly “Vibrant Gujarat” by an ambitious Chief Minister, recently elected as India’s Prime Minister, and who claims to have an iron grip on the administration. In the latter region of West Bengal, governmental power has only recently been wielded from the communist Left Front and party politics pervade much of the political life.

Our research in Gujarat has so far concentrated on the small urban agglomeration of Navsari/Vijalpore. We have investigated mainly the governance of urban parks and ponds, where we have focused on different forms of upper middle-class and elite participation through for example Private Public Partnerships, so called PPPs. These PPPs have been used for park maintenance, or club involvement in ‘beautification’ initiatives and seems to follow what Amita Baviskar has called “bourgeois environmentalism” in which middle-class interests are couched in environmental language to displace poor populations from the city centre. At the same time, these urban spaces have been the arenas of contestations around moral values, aesthetics, livelihoods, and modernist ideals, pointing to the importance to understand the urban environment as an expression of what Rademacher and Sivaramakrishnan (2013) discuss as urban “civility”. 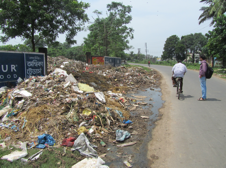 In Barddhaman, problems with solid waste management extend from within urban limits to the management of the municipal dumping ground. Local residents have protested both formally and informally but no lasting solution to their concerns has resulted. (Photo: N. Cornea, 5 Sept 2013)

Our research in West Bengal has been carried out in Barddhaman and Midnapore where we have focused on urban ponds and solid waste management. Here, party politics exercised formally through contact with councillors but also informally through the daily actions of party members play a large role in the governance. Other forms of socio-political organisations are also important governance actors. The communist legacy means that some urban spaces are governed through committees made up of several institutions. With the ousting of the Left Front from power by the Trinamool Congress, this management form has become hotly contested. At the same time, neighbourhood clubs are important actors in the urban environment, ranging from unregistered clubs from Muslim dominated slum areas to influential, registered clubs in upscale neighbourhoods formed of elite and citizens with vested power.

Further avenues that we aim to explore in our research in India are the governance networks citizens mobilise to address environmental challenges in their everyday lives and surroundings. Under way is also a participative photo project to better understand and facilitate discussions of aesthetic values and environmental priorities in different sections of the population.