In 2015, the National Research Institute of Colombia “Alexander von Humboldt” (commonly known as Instituto Humboldt), promoted Urban Nature: Platform of Experiences, a book project giving voice to diverse sets of knowledge that come into play when addressing and managing biodiversity and ecosystem services in Colombian cities. Over 80 authors presented 40 case studies across […]

In 2015, the National Research Institute of Colombia “Alexander von Humboldt” (commonly known as Instituto Humboldt), promoted Urban Nature: Platform of Experiences, a book project giving voice to diverse sets of knowledge that come into play when addressing and managing biodiversity and ecosystem services in Colombian cities. Over 80 authors presented 40 case studies across 11 cities. In 2016, the first edition (Spanish) was launched in Bogotá, Colombia and the second edition (English) has just been published. This post is based on my experience as editor of Urban Nature, but it is also an invitation to the readers of Situated UPE to learn more about Colombia and our cities.

It’s a well-worn phrase—but Colombia is diverse. Accounting for 14% of the Earth’s biodiversity, it is listed as one of the world’s “megadiverse” countries. It stretches from a Caribbean coastline to the deep forests of the Amazon basin, and from there to high mountains and a coastline on the Pacific Ocean. You also find over 1100 municipalities (municipios), including five large cities with one to eight million people, a wide group of mid-size cities (100,000-500,000 people), and rapidly growing smaller towns (<50.000 people). The Constitution of Colombia recognizes over 700 indigenous groups, called Resguardos indígenas, and roughly 200 black community organisations, referred to as Consejos comunitarios de comunidades negras.

In terms of environmental justice, legal uncertainties attached to natural areas in the urban-rural fringe have been the source of significant environmental conflicts in Colombia’s major cities. Local, regional and national environmental authorities are trapped in legal discussions, while citizens demand their right to areas where social and ecological functions can be properly balanced. Some examples are the Reserva Forestal Protectora Productora ‘Thomas van der Hammen’ in Bogotá (2006), the Reserva Forestal Protectora Bosque Oriental de Bogotá –RFPBOB (2013), the Parque Nacional Natural Tayrona in Santa Marta (2013) and the Plan de salvamiento del río Bogotá (2014). The underlying pattern here is the narrow understanding on the urban phenomena and its relationship with natural and semi-natural areas; this is a dichotomy that is strongly reinforced by our legal system. Looking deeper into the RFPBOB, after 28 years of legal ambiguity that dates back to its declaration, in 2005 the then Ministry of Environment, Housing and Land Development stated the 7% of the Reserve would now be used for different purposes, including housing development. After this decision, a citizen claimed the National Court (Corte Nacional) should ensure the public interest. In 2014, in response, the Consejo de Estado ordered three environmental authorities to develop a management plan within certain conditions and time frame. To sum up, the good news is that civic claims (acciones populares) have proved to work, the sad news is that it has taken the intervention of the national supreme tribunal on administrative affairs, Consejo de Estado, to set up coordination strategies when it comes to the urban environment and its regional scope. Environmental authorities seemed incapable of cooperating towards opportunities that other cities, in different latitudes, would certainly consider themselves fortunate to have.

The book Urban Nature became a venue for some of this extraordinary diversity, an artefact to start grasping the interaction between humans and nonhuman life across different logics, knowledges, and innovations, and across the rural-to-urban gradient. 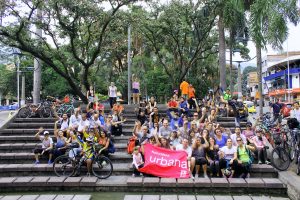 Biodiversity and urban development are disconnected (in planning)—but intertwined (in reality).

Cities and urban areas in Colombia are as diverse as the ecological landscapes that support them. Urban biodiversity hinges on complex biophysical processes that are now highly influenced by urban and human-dominated processes. Still they are treated as separate things.

Protected areas management is a perfect example. Despite ecological degradation processes along its coast, the Parque Nacional Natural Tayrona in Santa Marta city still a miracle in our Caribbean plains, the most transformed region in Colombia. It relies on tropical dry forest, a seriously threatened ecosystem and represents an entertainment opportunity, especially for inhabitants of Santa Marta who do not have quality natural public spaces within the urban area. The park is currently witnessing deep ecological changes, mainly because management strategies have not acknowledged urban dynamics. New questions need to arise beyond where to conserve and where to transform. Finding ways of designing a buffer zone where the Sierra Nevada, the city and the Caribbean Sea could be socially and ecologically connected is one such example.

Colombia is a country with many small cities. These cities find themselves confronted with the promise of growth and fair distribution of wealth and their ecological context. When the former dominates and social deliberation processes are absent, the natural environment exponentially transforms. For instance, Villavicencio, Puerto Gaitán and Orocué are three cities settled on the flooded savannas in the Orinoquia, a region that experienced 683% increase in oil exploitation from 2000 to 2010. This was pushed by national interests seeking to bring Foreign Direct Investment to the country. This political economy decision implied unprecedented financial revenues for this region. In a blink of an eye, small towns, many which didn’t have local environmental authorities, became cities facing social and environmental  challenges linked to  urbanization e.g. water pollution, transport congestion, insecurity, speculation in land and housing markets, and the growth of informal settlements.

Axes of urban expansion in Orocué, and the Meta River on the right (Colombia, 2013). © Maria A. Mejia

Urban commons in Colombia are now perceived as key assets for urban dwellers. This is a an important finding in the Urban Nature book project, where urban commons were viewed not only as natural resources and particular ecosystems such as forests, green spaces or wetlands. Instead, they were seen to be intertwined with their management arrangements, which included local to municipal actors and their knowledges. Urban commons have become articulated as part of the city often in response to urban development pressure when communities (together with experts) have stepped up and defended them, with some of them now being placed under co-management schemes between local knowers and city officials.

This has produced institutional changes. Before the 1990s, for instance, urban wetlands were not addressed in our legislation. Consequently they were never designated as protected areas and were hardly considered ecosystems at all. This has now changed radically. For example, currently Bogotá has a local wetland policy, in which co-management schemes are promoted as one of the implementation tools. Challenges remain, of course. These include defining who is allowed to participate, difficulties in defending co-management structures against growing land-use pressure, unbalanced management efforts towards wetlands located in urban versus those in rural areas, and enforcement. The message to keep in mind is that such institutional transition was only possible due to the commitment of certain community-based organizations over these ecosystems during the last 20 years. Some of the people involved in previous discussions on how to improve the city neighborhoods gathered together under NGOs (fundaciones), reviewed those legal frameworks potentially linked to urban wetlands, and took action. 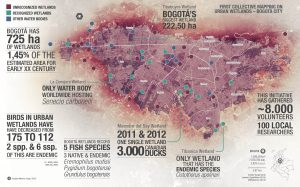 There is much more to the book Urban Nature. It gathered a wide range of thinkers and scholars and while it represents only a first step to thinking more explicitly about urban nature and its politics, I hope you will take an interest to share, discuss and challenge its findings and vision.

María Angélica Mejía – Colombian, currently studying towards an MSc. in Global Change Ecology at the University of Bayreuth, Germany.