Jonathan Silver ponders the meaning of Smart cities across urban Africa. The recent announcement by IBM establishing its twelfth global laboratory in Nairobi has followed a rise in news about Smart cities across urban Africa. These include IBM’s inclusion of Durban and Abuja in its Smarter Cities Challenge, a plethora of summits and conferences, together with planning for a series […]

The recent announcement by IBM establishing its twelfth global laboratory in Nairobi has followed a rise in news about Smart cities across urban Africa. These include IBM’s inclusion of Durban and Abuja in its Smarter Cities Challenge, a plethora of summits and conferences, together with planning for a series of new smart urban extensions on the periphery of major conurbations such as Accra and Kinshasa. Together these developments are generating an ever growing clamour concerning the potential of smart urbanism to transform urban Africa through the integration of digital technologies across networked infrastructures, offering resource efficiencies, global competitiveness, safer cities and ultimately much greater control over the built environment and everyday life.

Such coverage is often predicated on these techno-futures enabling ways to leapfrog other global regions through next generation infrastructure and technology. The images and narratives of smart futures in cities like Rio, portrayed in endless representations through its control room, and major Northern cities such as London and New York are ubiquitous and firmly entrenched in the imaginary of policymakers and the wider public. Yet the notion of smart in urban Africa has been less visible (at least on a global level) up till now. But as things change, the rise of Afro-Smart cities is going to require much more attention from those interested in rapid urbanisation and associated challenges of poverty and development faced by these diverse cities. For behind the widely circulated images of slum dwellers using mobile technologies to improve daily lives, the dominance of large ICT companies, a splintered urban landscape, land dispossession and the securitisation of urban space reveal a more complicated potential smart urban future.

Hip high tech start-ups, globally-connected young entrepreneurs and newly configured broadband infrastructures form a key ingredient of the Afro-Smart city or “digital revolution” narrative. In cities such as Kigali new techno-cultures are emerging and seeking to bring the Smart city to a much larger proportion of the population through cheap and accessible smart-phones, successful place-based appsand growing public interest in smart technologies being developed by African-based developers and users themselves. This new generation of Smart city innovators is increasingly connected through tech hubs and incubators for new businesses with spaces such as BantaLabs, Saint-Louis, Senegal through to Hive CoLab, Kampala offering spaces for collaboration and addressing both the specific ICT challenges and opportunities being faced across urban Africa.

Adding to this smart wave, rising interest from ICT companies,consultancies such as Deloitte and private equity is generating increased investment and policy focus around Smart cities. Yet the presence of global ICT companies across African cities, including IBM’s relationship with Nairobi poses similar questions to those being asked across urban areas in other parts of the world about who actually benefits from the implementation of smart technologies, growing flows of big data and the affordability of being smart. As Adam Greenfield, in his excellent book ‘ Against the SMART city’ cautions, such futures may well be nothing more than a (techno) utopian fantasy that, once unravelled, reveals little more than the opening of markets and opportunities for profit for large corporations. Nowhere are these powerful narratives of Smart city futures better articulated than in the range of urban development projects being pursued across the continent.

New infrastructure and city extensions are being planned and constructed across the length and breadth of the continent with promises of Smart city living that target that emerging but most unsteady of terms, the African middle class. These include projects in existing cities such as Johannesburg, which has entered into partnership with BWired to establish new broadband networks across the city. Yet, as commentators such as Nancy Oderdaal have long noticed, the splintered nature of ICT infrastructures across urban Africa shows a clear spatial division between the poor and rich that may be further cemented by shifts towards smart networks.

As well as reconfiguring existing urban space for the smart city, a plethora of new city extensions promising potential residents a technologised, data drive future, away from the seemingly chaotic (and unconnected) streets of other parts of the city are emerging and mirroring those well-known global hubsof Smart city hubris. Such Smart city developments are thus often designed beyond existing cities and their slum areas. Konza Techno City, 60km away from Nairobi in the newly named “Silicon Savannah” and Hope City, Ghana both promise high tech jobs, global corporate interest, advanced building design and high speed connectivity. 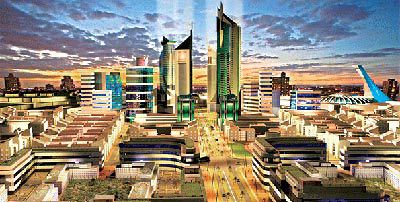 Yet problems in delivering these urban development projects are myriad and likely to entrench inequalities across already divided and contested cities. For example, La Cite du Fleuve, in DR Congo, brilliantly deconstructed by Filip De Boek, is creating a series of overlapping sources of tension in Kinshasa including struggles around land ownership and issues of dispossession that begin to lay bare the rhetoric of these urban developments. Such urban extensions may well offer smart living for urban dwellers but echoing the gated communities of the past few decades also have to be understood as new frontiers for capital accumulation and a clear demonstration of business sectors and parts of society withdrawing from the wider city and society into enclaves or archipelagos of high technology. Scholars are documenting such processes across the global South, most prominently Ayona Datta inIndia. This emerging knowledge suggests that the stark urban inequalities present in cities is unlikely to be addressed in these Smart city developments. Instead, dynamics of land dispossession, that are beginning to mirror the wider and ongoing land grabbing across the continent threaten, as Vanessa Watson has eloquently written, to turn these urban dreams into nightmares.

The final area of caution around smart urbanism across Africa needs to be centred around the securitisation of urban space through new technologies, infrastructures and data flows. The control of internet usage and social media is common across many cities including Addis Adaba and of courseCairo, where bloggers critical of the government or organisers of social mobilisations are being imprisoned on despairingly long terms. Being aware of how new smart technologies and infrastructures may also be deployed to curtail human rights and civic participation across urban Africa is critical to how we understand the rise of Afro-Smart cities. We only have to look back at the recent past in South Africa to see how IBM-designed, proto-smart technologies were used by the apartheid regime to control urban populations, restrict access to the cities and securitise a racialised, segregated urban space.

Further current examples are not too hard to find. For instance the development of the Skunk: Riot Drone by the South African company Desert Wolf , to deploy against miners in the country’s restive Platinum Belt and armed with surveillance systems and weapons (including pepper spray), provides a frankly terrifying vision of where Smart technologies may take us. After the Marikana massacre in 2012 by the South African police force and a highly-charged five-month strike by thousands of miners those urging caution in thinking that such technologies could not be used may need to think again. And with the first orders for 25 of these drones, it does not take much of an imaginative leap to see them being deployed across the simmering townships of the country as tensions and inequality continue to mount. Such developments provide a menacing retort to boosterish, utopian narratives of smart being used by large tech companies, consultants and increasingly government actors and policymakers.

Afro-Smart cities are becoming increasingly central in narratives about urban futures on the continent. Policies, reports and public discourse tend to paint a remorselessly upbeat vision of smart technologies that big data and advanced ICT infrastructure, connectivity and new urban (tech) space can help to transform landscapes of poverty and contribute to the oft-discussed “rise of Africa”. Some caution and perspective is certainly needed around Afro-Smart cities that interrogates these narratives and better understands the socio-spatial implications of these new forms of data-driven urbanism.

——————————
This blog first appeared on Africa@LSE
http://blogs.lse.ac.uk/africaatlse/2014/07/16/the-rise-of-afro-smart-cities-should-be-viewed-with-caution/
The author would like to acknowledge the support of Alan Wiig in reading an earlier draft of this text.
Back to Top