Following Donald Trump’s announcement that the United States will withdraw from the Paris Accord, a number of US cities signaled their intention to symbolically join the agreement and demonstrate their commitment to avoiding more than 1.5 C warming. Cities have a unique relationship to global climate change as the historical locus of greenhouse gas emissions […]

Following Donald Trump’s announcement that the United States will withdraw from the Paris Accord, a number of US cities signaled their intention to symbolically join the agreement and demonstrate their commitment to avoiding more than 1.5 C warming. Cities have a unique relationship to global climate change as the historical locus of greenhouse gas emissions due to their central role in the global economy. The relationship between cities and greenhouse gases is a result of both industrial production as well as contemporary post-industrial economies driven by consumption. The relationship is scalar too: many cities are representative of both low carbon infrastructure as well as the displacement of GHG emissions ‘elsewhere.’ Cities are linked through chains of finance, the movement of goods, and the circulation of discourses. All these relationships matter for thinking about climate change through the city. Amidst these overlapping networks, the unifying factor is the sheer densities and connections present in cities: of people, of money, and of the infrastructures that, in part, form the city as a functioning assemblage.

We are already locked into a significantly warmer future, and the physical impacts of that warming consistently outpace even the most severe projections of the Intergovernmental Panel on Climate Change. While the impacts of climate change will be felt all over the world, they will be unevenly distributed and intimately localized. In the city this means a range of consequences, but many of them fall under the broad category of increased stress on the already strained and sometimes non-existent infrastructures that form the background for everyday life. Infrastructure is only in the background until it fails – one need only think of the impacts of Superstorm Sandy to be reminded of what happens when infrastructure fails. And rising seas, temperatures, and rainfall all present existential risks to key bits of infrastructure in cities around the world. Risks, both unique to individual cities or more universal, are woven into the urban fabric, but climate change engenders significant, intertwined risks both to the physical form of cities, their role as spaces of habitation, and as the engines of global capitalism. The problem is that infrastructure, both existing and new, is expensive. The cost of urban mitigation and adaptation are projected to run just under US$2 trillion per year, an eye popping sum with no obvious source. How are cities meant to pay for decarbonization, adaptation, and increased access to key infrastructure simultaneously in an era of seemingly permanent austerity?

Enter green bonds. Simply put, green bonds are a mechanism for institutions such as cities to raise money to pay for projects that are explicitly environmentally inflected. They were invented by the European Investment Bank, the development bank of the European Union, in 2007. Since then, they have grown to become one of the most significant sources of climate finance in the world in under a decade. What started as an initiative by multilateral development banks worth a couple of hundred million dollars has become a 100 billion dollar per year asset class, double the amount of money that changes hands in global carbon markets annually. Indeed, green bonds have become increasingly relevant to the global financial system, evidenced by a cautiously optimistic report in The Economist this month that noted, “Investor demand…is booming.” Institutions ranging from major retail banks to sovereign countries are borrowing money on global debt markets to pay for climate change-related spending on projects including energy efficiency upgrades, renewable energy capacity, the construction or refurbishment of public transportation, and the development of urban water management infrastructure. There are no hard-and-fast rules as to what constitutes ‘greenness’ in a green bond. Instead, there are numerous sets of standards proliferating, from Chinese regulatory authorities (which authorize clean coal debt to be labeled green) to industry defined, voluntary labels like the Green Bonds Principles.

Green bonds are financing upgrades to the Long Island Railroad, which was severely impacted by Superstorm Sandy

Given the range of project types eligible to be categorized as ‘green’, it is unsurprising that cities and municipal regions have been enthusiastic adopters of the ‘green’ delineation when offering debt. Cities have become active on green debt markets since about 2014, which, uncoincidentally, was the year green debt began to take off. Issuances from US cities range from modest, proof-of-concept experiments like the city of Portland, Oregon’s US$16 million bond to finance LED streetlighting all the way to the New York Metropolitan Transit Authority’s green bonds for system-wide upgrades. In the case of New York, this includes upgrades to the Long Island Rail Road in the aftermath of Superstorm Sandy. In the last year, a few cities and regions in the Global South have begun issuing green debt, including Mexico City’s US$49 million bond that is meant to shore up the drinking water supply and pay for subway renovations.

Through the issuing of debt, climate action in the city becomes linked to global financial flows. Pension funds are some of the most active buyers of municipal infrastructure in general, and now are playing a role in buying municipal environmentally-inflected debt. This creates an interesting and potentially important constellation of twinned environmental-financial risk. The buyers of green debt bear the financial risk that a debt will not be repaid, in addition to the environmental risk that whatever project the debt is meant to fund will not live up to its green branding or will not be able to withstand the extreme conditions to which infrastructure will be increasingly subjected. A growing number of pension funds view green bonds as safe investments. Specifically, they are seen as capable of delivering future returns from which to pay benefits to current workers while also helping to mitigate the structural risks of economic chaos that would unfold if the potential impacts of climate change go unchecked. Further, issuing large chunks of debt is complex, specialized work, the type of work that is primarily done by the largest investment banks in the world. In 2017, the most prolific underwriters are Citigroup, Bank of America Merrill Lynch, HSBC, and JP Morgan, signaling the degree to which high finance has instantiated itself as a critical node in climate finance in addition to their role in shaping cities more generally.

While delegating the provisioning of climate finance to capital markets raises any number of equity issues in general, these issues are magnified and broadened in the context of building or retrofitting cities to cope with climate change. In both cases, private sector finance for municipal climate action may have significant ramifications for who is made to bear the risks of a changing climate. On the magnification side, municipal green bonds for infrastructure can be used to raise money to contribute to public-private partnerships where infrastructure is owned or operated, at least in part, by the private sector. In delegating some of the decision making around the form and function of urban infrastructure to profit-oriented companies, necessary infrastructure ceases to be a purely public good, and people without the ability to pay may be excluded. In other cases, unprofitable but unavoidable infrastructure needs will be impossible to outsource, forcing cities to bear the cost while profits are extracted from desirable projects. This could leave cities increasingly unable to mitigate climate risks as coffers are starved, reinforcing an inequitable urban riskscape of which environmental risks are only one aspect.

There are also equity of access issues at a global scale. Issuing environmentally-inflected debt is predicated on access to global debt markets. Cities across the Global South, which simultaneously bear the least responsibility for climate change but bear the biggest risk of catastrophe, largely do not have the prerequisites to borrow money for climate-safe infrastructure. These prerequisites range from having the technical capacity to evaluate impacts of individual projects to possessing a credit rating against which they might borrow. Instead, many cities across the South must rely on appropriations from national governments, which in turn may have to borrow the specified funding from multilateral development banks. This recreates well-trodden path dependencies with a green twist. 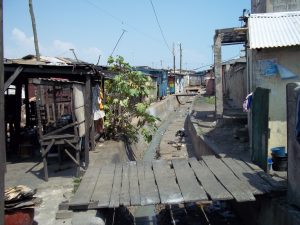 The future is undoubtedly urban, and equally will be riven with environmental risks that pose direct and indirect threats to lives and livelihoods. Many cities in the Global North have been subjected to years or decades of underinvestment and austerity, leading to infrastructural failures that will be exacerbated by climate change. The turn toward debt to pay for rising infrastructural costs, especially through public-private partnerships, could compound existing inequalities through decreased service provision elsewhere. Green bonds, in effect, suture financial and environmental risks together, influencing the types of responses that are possible while pegging the chances of creating livable cities to capital markets. Meanwhile, many cities in the Global South already feature stunningly unequal access to infrastructural services for basic necessities. These cities can ill afford to suffer unmitigated damages brought on by climate change. But neither can many afford the high cost of borrowing to which they would be subjected on international bond markets, if granted access at all. While it may be encouraging that big pools of money are showing interest in climate action, it is at best insufficient to pay for climate action in cities where it is most needed but also carries significant political-economic risks. The green bond market is a tiny sliver of global debt (a $US100 trillion asset class), but as the need for climate finance becomes more pressing and investors seek out investments not directly linked to the fossil fuel economy, the potential for growth (and the securitization of that debt into asset-backed securities) bears watching. As in so many other periods, cities are becoming laboratories for the co-mingling of environmental and financial risk, and the link is more explicit than ever.

This research was supported by a Swedish Research Council grant, ‘Climate Change and Transformations of Financial Risk’ and benefited from discussions with Brett Christophers and Leigh Johnson.